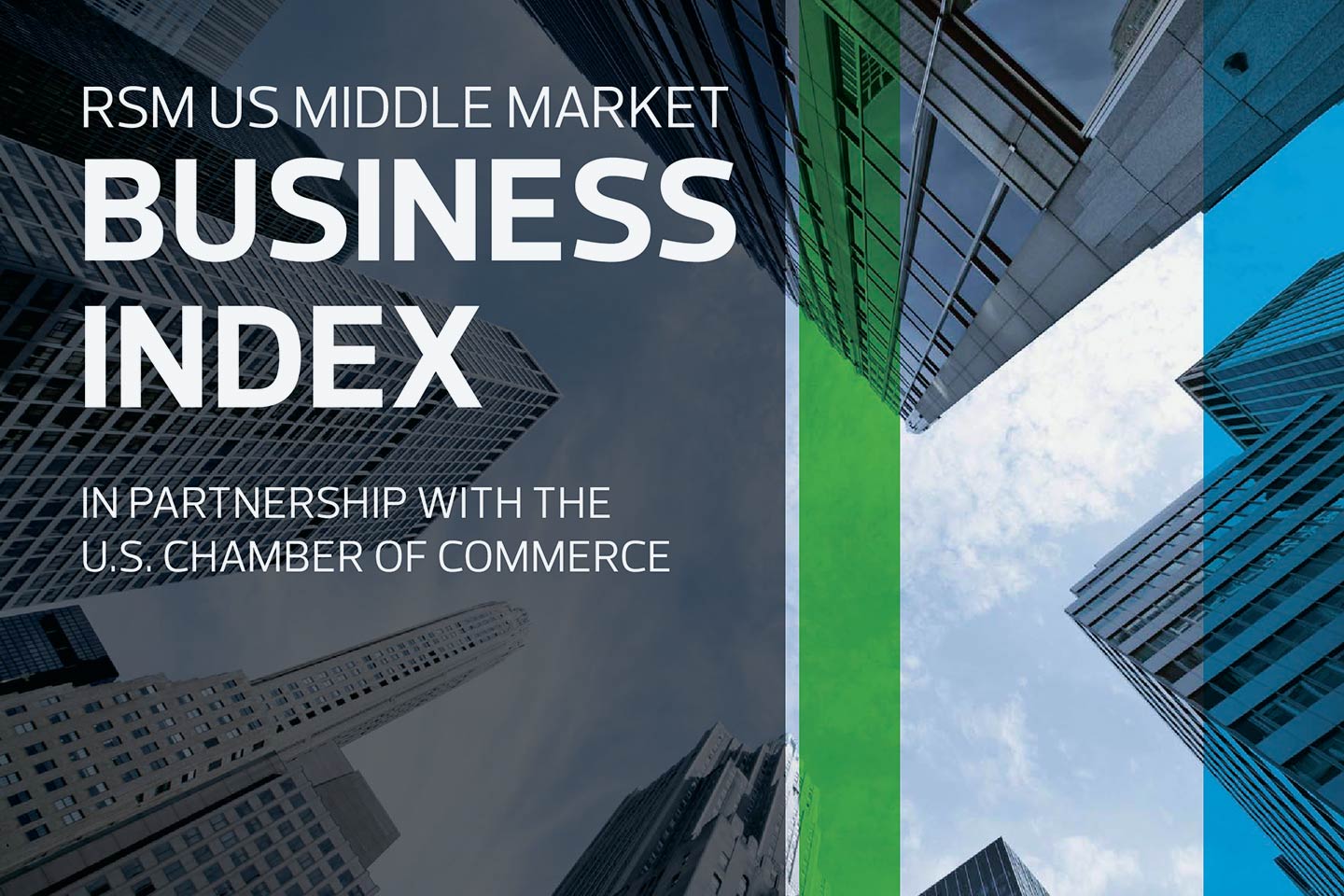 The RSM US Middle Market Business Index (MMBI), presented by RSM US LLP (“RSM”) in partnership with the U.S. Chamber of Commerce, increased in April 2021 to 132.1 from 128.0 in March 2021, indicating the U.S. economy is improving as the prospect of an economic boom, rising revenues and surging net earnings this year more than offset evidence of pricing pressures. This is the best reading for the index since the first quarter of 2020, the last quarter before pandemic shutdowns. The index is part of the MMBI for the second quarter.

“The undeniable strength of middle-market businesses is best illustrated by the strong jump in current economic circumstances over the past two months from 34% of survey respondents indicating an improvement in overall economic conditions in February to 49% in April,” said Joe Brusuelas, RSM US LLP chief economist. “Further highlighting the resilience of the American middle market, nearly half of the respondents noted an improvement in gross revenues (47%) and net earnings (48%) in the most recent quarter, occurring in conjunction with a 6.4% increase in gross domestic product. Middle market businesses are indicating great optimism moving forward, and we’re expecting an extraordinary economic boom as the recovery continues.”

With the significant improvements achieved in the most recent quarter, the economic outlook among middle-market executives is also increasingly positive. Looking ahead to the next six months, 74% of respondents stated they expect the general economy to improve, 72% indicated they expect an improvement in gross revenues and 71% anticipate growth in net earnings.

Businesses Prepare to Make Investments, Even as Challenges Remain
Though pricing pressures are a concern, 62% of respondents stated they intend to engage in productivity-enhancing capital expenditures over the next six months – in contrast with the 35% who said they did so over the recent quarter.

Additionally, as the economy continues to reopen, 69% indicated in April that they paid higher prices for goods this quarter compared to the previous quarter and only 43% stated they received prices downstream this quarter. Surging demand will continue to constrain supply chains, and a record 82% of respondents said they expect to pay more for the inputs used in their operations over the next six months.

It is important to note that while prices are increasing following steep declines during the pandemic last year, they are now moving back toward pre-pandemic levels, and the majority of survey respondents are not facing significant problems linked to inflation.

“Encouraged by vaccine distribution and loosening restrictions, there is a great amount of optimism from the middle market as business comes back and leaders see improving conditions for a great resurgence,” said U.S. Chamber Executive Vice President & Chief Policy Officer Neil Bradley. “The middle market has shown tremendous resilience and has been crucial in leading the country’s economic recovery. The Chamber is prepared to work closely with middle-market leaders to continue to navigate important legislative and policy issues to get back to business.”

The survey data that informs this index reading was gathered between April 7 and April 28, 2021.

About the RSM US Middle Market Business Index
RSM US LLP and the U.S. Chamber of Commerce have partnered to present the RSM US Middle Market Business Index (MMBI). It is based on research of middle market firms conducted by Harris Poll, which began in the first quarter of 2015. The survey is conducted four times a year, in the first month of each quarter: January, April, July, and October. The survey panel consists of 700 middle market executives and is designed to accurately reflect conditions in the middle market.

Built-in collaboration with Moody’s Analytics, the MMBI is borne out of the subset of questions in the survey that ask respondents to report the change in a variety of indicators. Respondents are asked a total of 20 questions patterned after those in other qualitative business surveys, such as those from the Institute of Supply Management and the National Federation of Independent Businesses.

The 20 questions relate to changes in various measures of their business, such as revenues, profits, capital expenditures, hiring, employee compensation, prices paid, prices received, and inventories. Some questions pertain to the economy and outlook, as well as to credit availability and borrowing. For 10 of the questions, respondents are asked to report the change from the previous quarter; for the other 10, they are asked to state the likely direction of these same indicators six months ahead.

The responses to each question are reported as diffusion indexes. The MMBI is a composite index computed as an equal-weighted sum of the diffusion indexes for 10 survey questions plus 100 to keep the MMBI from becoming negative. A reading above 100 for the MMBI indicates that the middle market is generally expanding; below 100 indicates that it is generally contracting. The distance from 100 is indicative of the strength of the expansion or contraction.

Gretchen A. Farrell joins CBIZ as Chief Human Resources Officer and takes over from Terri Bur, who retired after 25 years with the Company.
Read more

Over a year after the coronavirus first hit Europe, much of the continent spent Easter in lockdown as it grapples with a third wave.
Read more

Long COVID: Why This Should Matter to HR

“Long COVID” is a term used to describe the long-lasting impact that COVID-19 can have on a person, many months after they first contract it.
Read more

According to new research by the CIPD, employers have largely seen a benefit in productivity due to the shift to remote working.
Read more

GDP grew at a 6.4% annual rate in the quarter, leaving the economy within 1% of its peak.
Read more
Load more

Subscribe to our Newsletter, to stay ahead with unrivaled Finance and Economy intelligence!